You are here: Home / Library / After the Flashlight Man 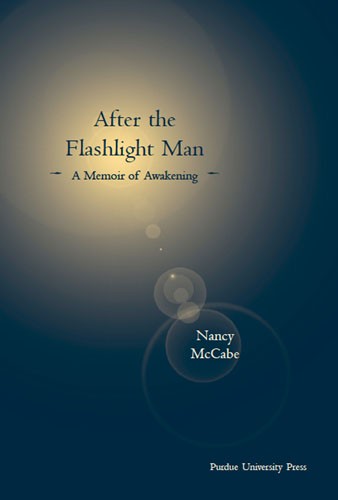 One night in 1990, a stranger cut the screen out of Nancy McCabe’s bedroom window while she slept and shone a flashlight into her eyes as she woke. A few weeks later, her father came down with temporary amnesia.

Although unrelated, these events became linked in her mind, sweeping out from under her the fundamentals she had always taken for granted: safety, freedom, the stability of memory, and a general oblivion to mortality.

After the Flashlight Man is the story of how she came to terms with these experiences that threw her life into a whole new light: self-defense classes, rape crisis volunteer work, writing, and meditation that served as checkpoints along a healing journey while she re¬-examined events from her childhood and relationships with family and friends.

Ultimately, a flashlight turned against her became instead a metaphorical tool she used to blazed a path, the impetus to reclaim, recast, and tell her own stories, discovering her own power to reinvent her vision of her life.

Nancy McCabe is a rare blend of thinker and artist. After the Flashlight Man, her courageous and beautifully written memoir, is must reading for both men and women: any man who has wittingly or unknowingly threatened a woman; any woman who has found herself outside her familiar life, yearning to return. Nancy McCabe makes plain, with stunning grace and strength, the redemptive power of story.” — Lee Martin, author of From our House

Nancy McCabe transforms assault to insight, using the best of writerly means: depth, intelligence, leaps of language. After the Flashlight Man is a gift to the reader: a personal story that offers a new way to look at one’s own life.” — Janet Sternberg, author of Phantom Limb and The Writer on Her Work

After the Flashlight Man steers the reader into territories we sometimes choose to forget, but know still exist on the fringes: those chance meetings, those existential cause-and-effects, the omnipresent “When will I be able to figure everything out?’ Mrs. McCabe’s writing is a mix of Annie Dillard and Scott Russell Sanders, though this story can only be labeled as all her own—or all our own.” — George Singleton, author of The Half-Mammals of Dixie

The book chronicles the interconnections between seemingly unrelated — and sometimes surreal — episodes in her life.

Gone are the traditional rules of biographical chronology, replaced with a dual-time perspective where the author is simultaneously recounting and reassessing key events, even as she questions their meaning and her own memory’s accuracy.

“I had been trained as a fiction writer and focused on it for many years,” McCabe said. “But I wanted to write about a number of bizarre events in my life that didn’t really work as fiction.

The events were already too dramatic on their own to bury under disguises of fiction and using them as material for fiction drained the life out of them, but they took off when I decided to write them as nonfiction.”

McCabe takes the reader through her various career shifts and relationships as well as her attempts at therapy, with mixed success, through self-defense and meditation classes.

Along the way readers meet her relatives, friends and antagonists past and present, her personal ghost and her writing pupils. Most of all, we meet her in a number of incarnations: daughter, awkward teenager, crime victim, rape crisis counselor, graduate student, grade school writing teacher and, throughout, writer.” — from “A Closer Look: Nancy McCabe”, University Times by Peter Hart

After the Flashlight Man: A Memoir of Awakening is an elegantly written memoir about a violated woman’s determination to reclaim control of her emotions by defining her identity. . .It is [her] poet’s vision that makes After the Flashlight Man soar with searing imagery, fresh language, and intense reflection.” — T. J. Forrester in Literary Potpourri