You are here: Home / Library / Crossing the Blue Willow Bridge 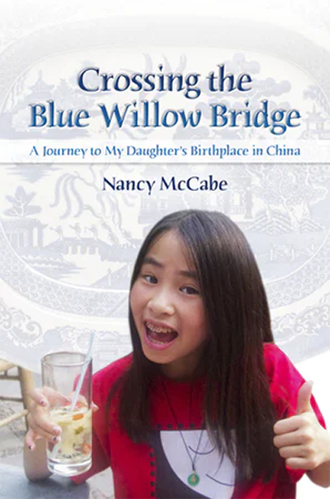 Even before Nancy and her daughter, Sophie, left for China, it was clear that, as the mother of an adopted child from China, she would be seeing the country as a tourist while her daughter, who was seeing the place for the first time in her memory, was “going home.” Part travelogue, part memoir, Crossing the Blue Willow Bridge is an exploration of place and its influence on the meaning of family.

A sequel to Meeting Sophie, which tells her story of adopting Sophie as a single woman, Crossing the Blue Willow Bridge picks up a decade later with a much different Sophie — a ten-year-old with braces who wears black nail polish, sneaks eyeliner, wears clothing decorated with skulls, and has mixed feelings about being one of the few non-white children in the little Pennsylvania town where she lives.

Since she was young, Sophie had felt a closeness to the country of her birth and held it in an idealized light. At ten, she began referring to herself as Asian instead of Asian-American. It was Nancy’s hope that visiting China would “help her become comfortable with both sides of the hyphen, figure out how to be both Chinese and American, together.”

As an adoptive parent of a foreign-born child, Nancy knows that homeland visits are an important rite of passage to help children make sense of the multiple strands of their heritage, create their own hybrid traditions, and find their particular place in the world. Yet here she was, still reeling from her own mother’s recent death, wondering how she could give any part of Sophie back to her homeland.

Nancy hoped Sophie would find affirmation and connection in China, even as she saw firsthand some of the realities of China — overpopulation, pollution, and an oppressive government — but she also worried about what that meant for their relationship.

Throughout their journey on a tour for adopted children, they experience China very differently. New tensions and challenges emerge, illuminating how closely intertwined place is with sense of self. As they learn to understand each other, they also lay the groundwork for visiting Sophie’s orphanage and birth village, life-changing experiences for both of them.

Nancy McCabe has written one of the most compelling books I’ve ever read. I read it on the plane, on the train, on vacation, at every opportunity till I’d gobbled it up. Here is a truthful story for every parent and child about their love, hope, and frustration with one another.” — Sena Jeter Naslund, author of Ahab’s Wife and Abundance, A Novel of Marie Antoinette

In this heartfelt memoir, McCabe shares a touching journey as she travels to China to introduce her adopted daughter to the places and people from her past. The resulting story radiates wisdom about cross-cultural connections, while acknowledging the struggles of child-rearing. Blue Willow Bridge offers lessons in love and patience that will apply not only to mothers and fathers of adopted children, but to all parents.” — Laura Brodie, author of One Good Year: A Mother and Daughter’s Educational Adventure

With lyrical sensitivity and frank humor, the author of Meeting Sophie explores the myriad logistical and emotional facets of international adoption. Nancy McCabe is keenly aware of the challenge in reconciling her daughter’s American and Chinese identities, as they travel to Sophie’s birthplace—a journey that’s less a closure than an aperture. Crossing the Blue Willow Bridge is a brave, balanced, nuanced narrative, offering a complex answer to the simple question: what is home?” — Sarah Saffian, author of Ithaka: A Daughter’s Memoir of Being Found

In prose both graceful and unsentimental, Nancy McCabe tells the story of the search for identity and the yearning for connection that is at the core of the mother-daughter relationship. As she returns to her adoptive daughter’s birthplace, as she struggles with the cultural divide she sees at home, as she watches her daughter, a budding gymnast, ‘throw herself into empty space toward the high bar,’ McCabe learns both to love and to let go. This is a book for every mother, adoptive and biological, who watches her daughter with love, awe—and bated breath.” — Lauren Kessler, author of My Teenage Werewolf: A Mother, A Daughter, A Journey through the Thicket of Adolescence

Careening between disappointment and joy, “Crossing the Blue Willow Bridge” is the story of two journeys woven together. One is a travelogue of the trip to China, a tour McCabe and her daughter took for adopted children and their parents; the other is a memoir about parenting an adopted child. McCabe presents the journeys through the lens of expectations, both her own and the culture’s, and treats their complexities with insight, humor and sensitivity.” — Karen Gettert Shoemaker from Lincoln Journal Star